Get fresh music recommendations delivered to your inbox every Friday.

A Journey Into Madness 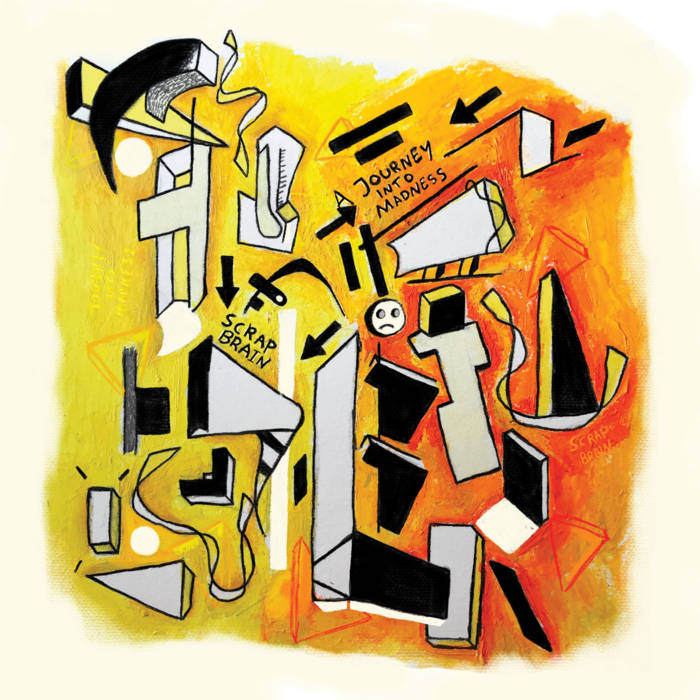 Watching Nebula while i'm not always in the mood for the noisy, chaotic sound this record goes for, it hits pretty fuckin hard when i am Favorite track: Floundering.

rcharbon A good album, though the production is a bit thin. Favorite track: Crybaby.

A Drunken Sailor and Thrilling Living co-release. Edition of 500 on black vinyl with double-sided insert.

London/Oxford-based SCRAP BRAIN are back with a long player that expands and improves on their dirgey and unconventional brand of hardcore punk. This time around the group embraces a wall of sound approach; this is a record that sounds both huge and claustrophobic at once. A dissonant take on FLIPPER with one of the best lyricists in contemporary music.

"The London band Scrap Brain have an unhinged, noise-damaged take on punk rock. It’s like one band combined the fastest, sludgiest early-’80s hardcore with the most oblique, damaged early-’80s postpunk, except with lyrics about what it’s like to be mentally ill and queer in the late ’10s. Last year, the band released a furious, impressive EP called Unhappy Hardcore. And now they’re following it up with their full-length debut A Journey Into Madness. It’s a wild ride of an album, a vengeful ripshit self-interrogation." - Tom Breihan, Stereogum

"Scrap Brain are a U.K. band who play raucous hardcore—noisy, crammed with delightfully ignorant riffs (this is a compliment), walls of feedback, and pounding percussion. They’re one of those bands that sound as if the centrifugal force generated by their collective fury is the only thing that’s keeping the music from flying apart. This is a surprisingly difficult sound to master, and, in my experience, it only communicates if the group is sincere in their message. A Journey Into Madness is about being queer and mentally ill in a world that is amenable to neither, holding onto dry humor as a way of dealing with daily struggles (the promo for this album includes an extremely perfect Vengaboys cover, should you wonder whether this is a pedantically self-serious group of people)." - Jes Skolnik, Bandcamp Daily

"Scrap Brain’s base mode of operation is a Flipper-inspired lurch, but they rarely just do that. Instead, they augment things with a catchy guitar riff or bass line, unexpected tempo changes (sometimes speeding up to blistering hardcore tempos), and envelop everything in a swirl of chaotic noise that keeps my ear interested even though it’s nothing one might describe as a riff or a melody. It’s not unlike what Violence Creeps did, but noisier, darker, and more frightening. Scrap Brain also have a lot of what I’ll call “expressionistic hardcore” in their sound. I’m thinking of bands like Neon and Mozart who can abandon conventional rhythm and melody, engaging instead in the spontaneous and physical eruption of energy I associate with the most out-there free jazz. Scrap Brain sound like a punk band trying to do a musical version of an abstract expressionist painting, and I love it. Even more impressive is that Scrap Brain can reel it back in and build a more structured context around those moments of pure expression. Journey Into Madness is a wild ride and occasionally a tough listen, but if you like the bands I’ve mentioned, you might be one of the few who can get down with this." - Sorry State Records

"A Journey Into Madness opens with swirling, repetitive sounds: muffled music, droning noises, a phrase you can’t quite make out. Then those trail off, as if disappearing down a drain. A guitar feeds back, and the abrasive hardcore of U.K.’s Scrap Brain thrashes in. Scrap Brain sound royally pissed off—and with good reason. The brilliant “Die TERF Scum” is the anti-TERF (trans-exclusionary radical feminist) tirade the world needs. “No TERFs at Pride / No TERFs in libraries / No TERFs on Twitter / No TERFs in universities,” vocalist Camille Rearden shouts over a blistering cacophony of instrumentation. Elsewhere on the album, the four-piece rail against the unethical nature of business, the historical abuses of power of healthcare systems, socializing while sober, and other modern-day maladies. Scrap Brain are as brutal as ever on this LP, with an angry intensity that’s impossible to resist." - Kerry Cardoza, Bandcamp Daily

"How is it that bad music makes me feel so good? I find myself wondering that while listening to the debut album from London’s Scrap Brain, who deliver on the promise of their debut 7″ EP from last year. The high points of A Journey Into Madness seem to answer the question of “what would happen if Honey Bane fronted Flipper?” – plodding, simplistic, unreasonably noisy and unsophisticated, I can’t help but wonder why anyone would want their punk performed any other way. I was reading an interview with the band, and the guitarist mentioned that no one ever notices when he messes up, and I have no reason to doubt him after hearing the faster songs on here, which maintain an uneasy equilibrium on the verge of collapse, as though everything is held together by duct tape and safety pins. For as simplistic as it is, Scrap Brain’s sound is atypical, with progressions and changes that haven’t been written by other punk bands a hundred times over. And while the musical presentation is not a graduate-level display of prowess, the lyrics are keenly critical and take aim at the many disparities, crises and miseries Scrap Brain encounter on a routine basis. It’s a journey into madness in both senses of the word: furious anger and spiraling insanity." - Yellow Green Red

Recorded and mixed by Jonah Falco.
Mastered by Daniel Husayn.